A few months back, one of our regular clients asked us to produce a 360° social media video for one of their brands. With 360 video still is in it’s infancy, and it being our first venture into the world of VR, we hired a 360 rig from Pro Motion Hire for a quick recce before the project began.

I wanted to test the rig in an environment that I could fully control, so I could focus on getting my head around the rig and not worry too much about what the subject was. Initially, I considered running around in circles as a test, however, since we had the rig for a whole day, I thought why not try to produce something half decent looking. Fortunately, a few close friends are musicians so I asked them to put their heads together and see if any local bands would be interested in shooting a little 360 music video.

Here’s the finished 360 video (hosted on Facebook) from the recce. Performing Michael Jackson’s The Way You Make Me Feel, you can catch these guys jamming at Dulcimer in Chorlton, Manchester every 1st and 3rd Wednesday.

Quick thanks to The Edge Arts Centre for letting us use your venue to film the video.

When researching which 360 camera array to use, there was (at the time) really only one option for our budget; the Freedom 360. This 360×180 degree array allows the user to mount six GoPro Hero4’s together to record six videos that can be stitched into a full spherical, equi-rectangular 360 video. The geometry gives you the freedom to hold the rig in any direction, with no blind spot to worry about. The array was attached to a light stand and placed in the centre of the room. with the band members each facing towards the camera. The cameras were set recording via the wifi remote, and each feed could be monitored via the GoPro app on a tablet.

Lighting was always going to be an issue when recording 360, as there’s no hiding the lamps/rigs from the cameras. We had to rely on the natural light in the venue; luckily the room we used to record had large windows on three of the walls, along with overhead strip lights, supplemented with a few incidentals placed behind the band. The huge field of view also meant that I had to monitor the video feeds from behind a closed door in the next room (along with the sound recordists, who were recording the music live). 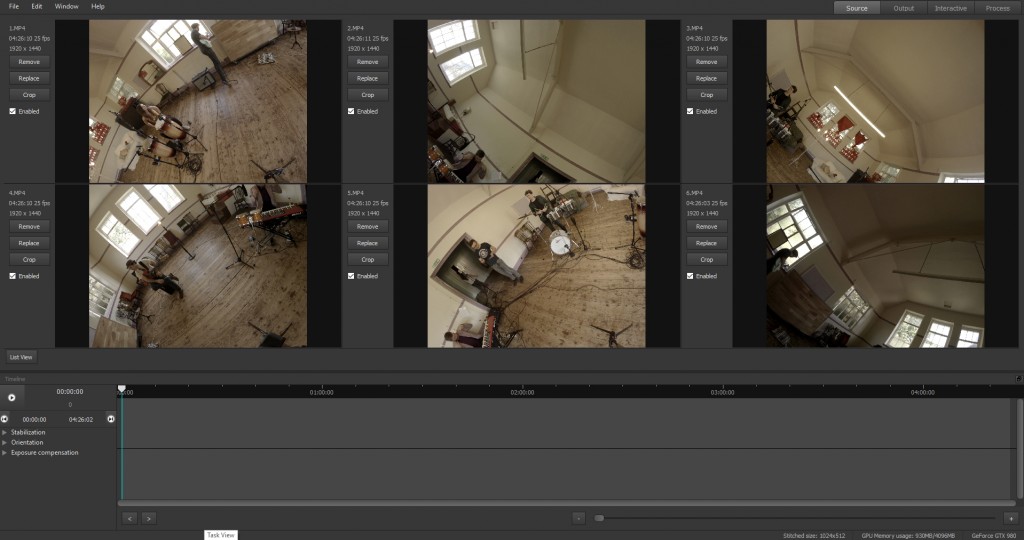 Once the footage from all 6 cameras was in the can, it was time to start putting it all together. Using VideoStitch Studio, we first synchronized the 6 cameras together (using the audio from each camera as a reference), then the 6 video outputs were stitched together to produce one single video file.

After the single video file had been exported from VideoStitch, this was then imported into Adobe Premiere for colour grading. We also used the SkyBox Studio by Mettle in Adobe After Effects to add the titles and logos so they appear correctly within the 360 space. It’s a nice little plug-in and makes adding text and other graphics to your VR scene really easy, including covering our light stand legs in the bottom of the frame with our Coolbox logo (sse below). 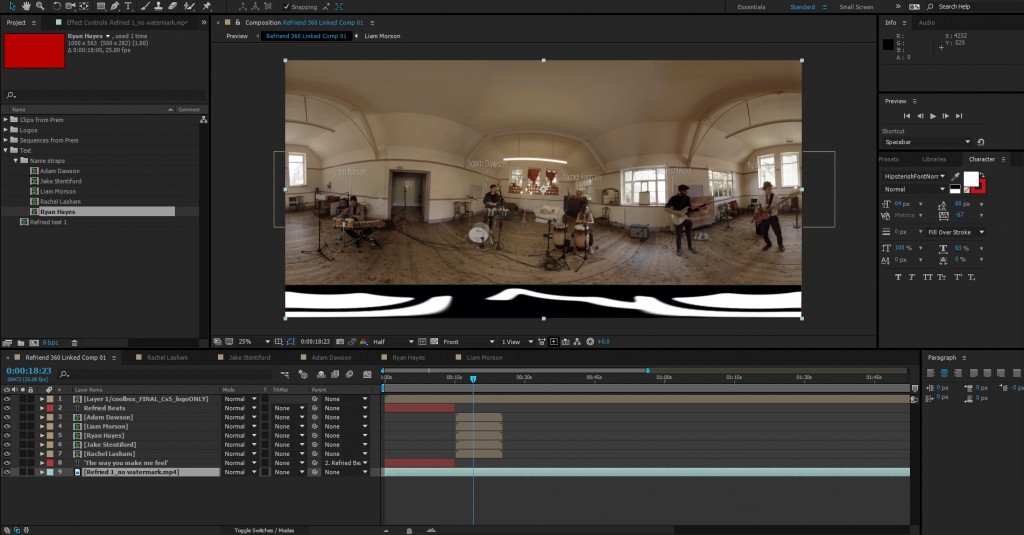 After video had been exported from Premiere, the relevant metadata was injected into the file – allowing YouTube and Facebook to correctly display the film in 360 when uploaded.

Overall, I was impressed with the Freedom 360 and the results we got from the recce with the band. The set up’s definitely not without its limitations – mainly due to the little ‘quirks’ of simultaneously operating six GoPros at once (they didn’t like all being paired to the GoPro App and Remote Control at once). Also, the GoPro App only allows the user to view a single camera at a time, so essentially you’re shooting blind on the other 5 cameras until you change to view the next one – which understandably made me a tad nervous. Furthermore, with all the cameras permanently in WiFi mode, they rapidly went through the 24 batteries I had with me, and the Freedom rig doesn’t allow the easiest access the GoPro’s battery hatch.

At the time of writing this, GoPro have recently released their Omni system which will hopefully address some of the issues listed above. It’s an exciting time for 360, and as someone who was initially dismissive of the technology, I have to say I’m looking forward to what the future will hold for this medium of filmmaking.