Back in May 2014, our crew headed over to the west coast of Scotland to shoot at our third Atlantic Salmon farm, this time tasked with producing three 2-minute films for one of the largest seafood companies in the world, Marine Harvest.

The format of the films was a little different to our previous farm visits. This time we focused on Head chef at Ondine restaurant in Edinburgh, Roy Brett and his trip to Laga Bay Salmon Farm.

Here are the finished three films. 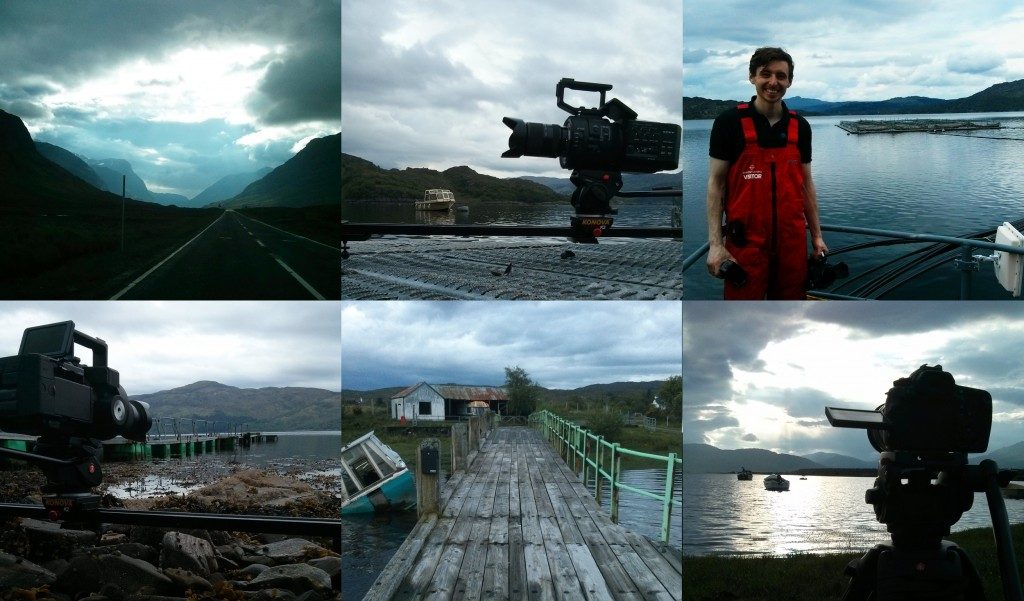 The films were shown at the Royal Highland Show 2014 during Roy’s cooking demonstrations. We opted against any dialogue in the films; the idea being that as Roy cooks his three dishes on stage, he can show the audience exactly where the salmon he’s using comes from, while also touching on some of the issues the public often cite against the practice, such as the welfare of the fish and feeding methods.

It was a varied shoot to say the least, our camera operator Jonnie followed Roy for most of the day with the 5D on a glidecam for silky smooth pans of the chef meeting the workers at the farm. Meanwhile, I used our new Sony FS700 (pictured above) to shoot salmon jumping out of the water in super slow mo (200fps & 400fps).

On previous visits, I had to sit for hours with the camera constantly rolling, guessing where the salmon would jump from. Luckily, the FS700 has an ‘end trigger’ option, enabling the camera to constantly buffer the images but not actually record until you hit the trigger, then it captures the previous 7 seconds (of real time) to the SD card. This meant we got some pretty incredible shots of the salmon jumping clear of the water in sexy slow mo.

As my loyal Canon 60D is no longer my A cam, I finally had the guts to test out my submersible housing for it (pictured at the top). This gave us a unique view of the salmon swimming around below the surface, a point of view that was definitely missing from our previous films.